Oh hey, we can rightfully call ourselves speedsubbers again.

Here it is, the one and only end of emorage arc. 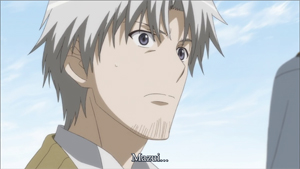 That's right, we get a shoutout!

Also, as much as it saddens me, this ends our streak of never having to encode anything. Huh? What? No encoding? That's right, the more astute amongst you may have noticed that we've never actually encoded anything.

Until today, that is.

Why? To end the bitter war between vfr and subpar computers that seems to plague half of you out there. No longer will scrolling network messages be the bane of crappy codec setups! Now you will be the master of your own fps! <anarchy/>

Errata:
Really should have been mentioned last week, but better late than never right? The reason Amarty hands Lawrence 300 silver, rather than the 500 silver agreed upon in the bar, is because they had arranged for Amarty's horses, worth 200 silver, to be part of the deal, since he didn't have that much cash on hand. No clue why they didn't feel it necessary to mention this in the anime.

Never seen a Comiket? Then you'll want to read this.

Index-tan and other overdue updates

agree with nagi! please sub tamako love story mazui fanI really wish you'd sub Tamako Love Story. If you do, it'd be like a birthday present for me. :> NagiR.I.P. Mazui you brought us a lot of fun so thanks for that! Still i am always in for some necromancy... i can even get most of the ... DBS

To Aru Kagaku no Railgun S 23

To Aru Kagaku no Railgun S 22

Actually I am not... see here toward mid-area and down. http://www.nyaa.se/?page=view&tid=475175#c288819 Also I have a Quad.x.Quad cor... toadsage@toadsage you seem to be the only one having this issue. I noticed a small "lag" between the part A and B, but it continued just like a... anonymousI appreciate your work. However until you can integrate the chapter-indexing without issues, perhaps you should stop indexing chapters.... toadsage

To Aru Kagaku no Railgun S 21

you got a nice article.Thanks Again. Really Great. topturHi can u take a photo of this and media info ty mojiEr...the plot device is the missing image?! *GASP!* KuroLoli